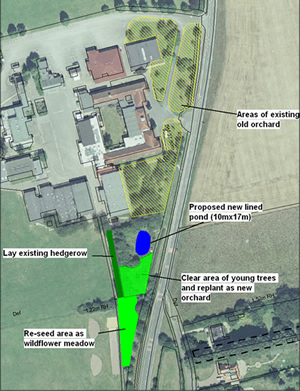 In March 2011 Econet received an enquiry from the Piggott School, Wargrave asking whether we would be interested in helping with the regeneration of an old orchard area to create a wildlife garden. On a subsequent visit to the site with BTCV (now "The Conservation Volunteers"), it was decided that BTCV would help with the initial preparation of the site and the creation of a pond while CROW would concentrate on laying an old hawthorn hedge which separated the site from the school playing fields.

BTCV's first task was on the second Saturday in October, when on a beautiful sunny day they were joined by a number of parents to start clearing the site, removing buddleia from around the area the pond was to occupy and thinning a dense clump of wild cherry which had self seeded in one corner. The pond had already been dug and this made an excellent site for a bonfire.

Just over three weeks later at the start of November, BTCV returned to install the pond liner. A number of volunteers from CROW were present who were able to share the knowledge they had gained from local expert Rod d'Ayala when installing a new pond liner at Brookfields School a few months earlier. The task was well planned as the following night it rained and the process of filling the pond had begun as the photograph shows.

Two weeks later on the 9th November, CROW had its first task at the site when they started laying the hedge.

Creating the Pond
The pond was created by digging a hole somewhat deeper than required and any glass, stones and other sharp objects were cleared. The area was then covered with an underlay over which the pond liner was laid, the area covered by the underlay was larger than the liner allowing the underlay to be folded over the liner's edge. A second layer of underlay was then placed over the liner again going beyond the edge of the liner allowing it also to be folded over the edge of the liner and under the first layer of underlay. Having protected the liner by sandwiching between two layers of underlay, some of the excavated subsoil was return to the pond covering the lining and forming a natural base to the pond, again taking care to exclude sharp objects. The top soil was avoided as it would add nutrients to the water. The pond was then left to fill with rain water. Given time the pond should populate naturally so avoiding the expense and effort of planting.

On 7th December CROW return for their second session laying the hedge.

The hedge which was mainly hawthorn had been allowed to grow up and was casting shadow on what was to be the wildlife garden. It was now about ten to twelve feet in height. More problematically it had previously been maintained as a hedge about five feet in height, so that some of the trunks were of considerable girth making them difficult to lay. Ideally the hedge might have been coppiced and allowed to regenerate before laying. However we persevered.

As the work progressed the black mulberry which had been lost between the high hawthorn hedge and a thicket of wild cherry, once again becomes a feature of the sight.

Mulberries
The common or black mulberry Morus nigra was introduced in to this country about 1550 (or by the Romans depending on which book you read). The male and female flowers in the form of catkins, occur on separate trees but whether pollinated or not the female catkins swell forming a crimson fruit not dissimilar to a loganberry. When fully ripe the fruit turns purple or black, it can be eaten raw having an unusual slightly acidic flavour and is said to make excellent jam or can be used to make wine. The black mulberry grows to about 30 feet in height and lives around 150 years. A related species the white mulberry Morus alba is the food plant of silk worms.

The 18th January and CROW's final visit to the school when we aim to complete laying the hedge and thinning the woodland area.

The weather is somewhat different than when BTCV had their first task, for the pond which is nicely filling with water, is today covered with ice; probably not thick enough for skating and fortunately no one tries.

The mulberry is again restored to its rightful position as the outstanding feature of the sight.

Many thanks to the Piggott School for inviting us and to all our volunteers who have helped with this task.

Postscript
In March the school received a Green Flag Award for 2012 when special mention was made of the regeneration of the Orchard area.