An area of diseased ash, possibly dieback, had been found at the site and it was the aim of the task to clear and burn the affected trees in the hope of at least slowing the spread of the disease.

Comparing what was observed with the information on the Forestry Commission website there seems little doubt that these ash were suffering from dieback. Unfortunately as the task progressed it became obvious that the problem was not limited to this one area and we abandon our attempt at removing all the diseased trees and restricted our efforts on clearing along the edge of the adjacent path which was wet and muddy following recent rain.

On what must have been one of the warmest days so far this year we had seen a number of butterflies during the course of the morning including brimstone, comma, orange tip and peacock. With spring in the air we decide to end the task with a tour of the site following the circular route around the lake.

An artificial sand martin bank created and maintained by members of Theale Bird Group. Birds were seen visiting the nesting holes as we watched. 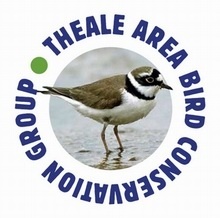 ..... promising a good crop of sloes come the autumn?

Black headed gulls whose constant cries and squabbling provided an accompaniment to the task.